The Place: Special Refuge in a Holy Land

The Place: Special Refuge in a Holy Land

After Buddha Shakyamuni attained enlightenment, he traveled from Bodhgaya to Deer Park in the holy city of Sarnath, India. It was here that he first turned the Wheel of Dharma, teaching his disciples about the path to freedom from suffering, also known as the Four Noble Truths. 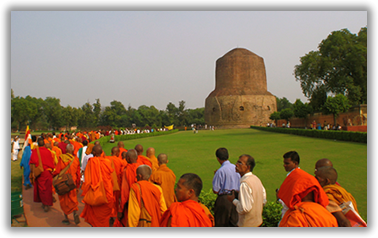 Orgyen Samye Chökhor Ling is the first Buddhist nunnery located at historic Deer Park in Sarnath. The nunnery is located on four acres of land ornamented with beautiful fruit trees and flowers, and is only a short walk from the Rinpoches’ monastery, Padma Samye Chökhor Ling.

Orgyen Samye Chökhor Ling Nunnery is an educational institution that provides a nurturing and supportive environment for young women to learn both secular studies, such as science, math, and language, as well as the ancient lineage philosophy and rituals of their Buddhist cultural heritage.